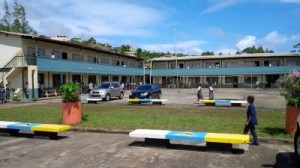 Located in the scenic east coast fishing village of Dennery, Clendon Mason Memorial Secondary School (CMMSS) is one of the Secondary Schools found on the Caribbean island of Saint Lucia.  The institution was named after former parliamentarian and Dennery native, the late Honourable Clendon Mason.

DJSS had a small initial intake of students in its early years and offered a limited number of subjects.  These comprised Mathematics, English, Social Studies, French, Science, Health Science, Agriculture, Home Economics and Industrial Arts.  Extra and Co-curricular activities complemented the curriculum.  A modest but effective staff of seven teachers taught the curriculum.  Most of the students at the time hailed from Dennery and the Mabouya Valley.  Later,  the catchment area stretched from South Castries to Desruisseaux.

Just after 1988 Mr Luke Vaughn Girard brought his sterling career as Principal of DJSS to a close and Mr Egbert “Tappie” James took over the helm as Acting Principal.  In that period most of the Junior Secondary Schools were being upgraded to full Secondary School status.

DJSS was the last surviving Junior Secondary School on the island and in 1990, Mr Egbert James felt that the moment to upgrade the institution to the next level had arrived.  This sentiment was communicated to the Ministry of Education.