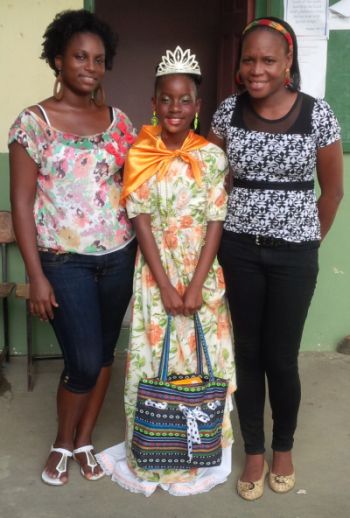 Anticipation for this year’s annual CMMSS La Wen Kwéyol Pageant which took place on Friday 24th October 2014 was customarily high.   As simply the best secondary school event of that nature on the planet this was not the least bit surprising.  This year, the promotion and hype surrounding the show were taken to stratospheric levels.  The contestants Shontell David, Stephie Emmanuel, Eltina Felix, Vianna Jacob, Alysa Joseph and Johnasia Stanislas were placed under the spotlight unlike anything they had experienced before with television and radio appearances, glitzy photo shoots and participation in a glamourous fashion show at a top hotel.

On the morning of the show the excitement among the contestants, attending students and others was palpable.  The school’s compound was ablaze with colourful and imaginatively designed kwéyol themed outfits.  The female spectators it appeared were determined not to be outdone by the contestants.  The weather was likewise in compliant mood as evidenced by the bright sunshine and brilliant blue skies.  The atmosphere was thus set for an epic show and the six beauties duly delivered!

If there were any doubts that a real battle was in the offing, then that was summarily dispelled. The contestants in a mock skirmish for the crown and their introductory presentations made it known in no uncertain terms that they were here to win and to dazzle the crowd in the process.  A brief appearance by the 2013 Wen Kwéyol – the charming Timacia Remy (formerly Sealy) undoubtedly heightened the desire among the six beautiful young ladies vying for her crown.

In the first section, as the name suggests, the contestants had to showcase original outfits that they had designed and created using unconventional materials.  The artistic creativity was immediately evident as six exquisite conceptions produced from a combination of dried banana leaves, plastic banana protective sleeves, fish nets, plastic sack material, jute sack material (sack chenchaw in kwéyol), old newspapers, seaweed, printing paper and shockingly even regular cloth, were modelled.