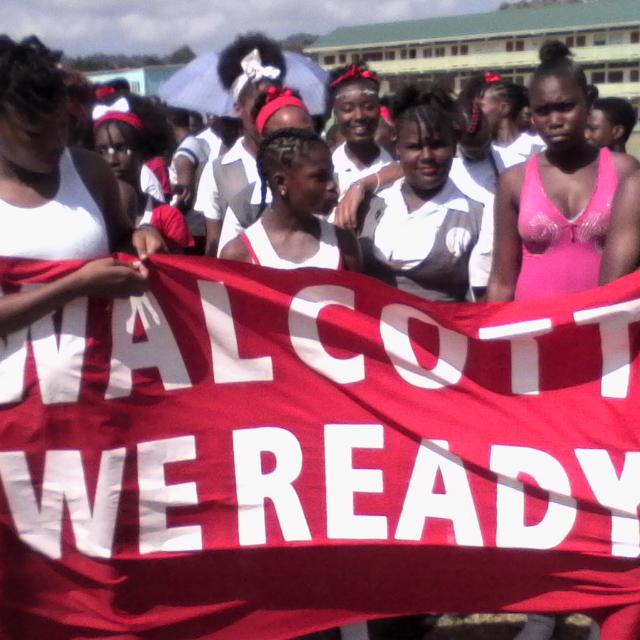 ey said that they were ready and indeed they were.  Equipped with their own tent and boasting their own studio recorded power soca and nearly their full complement of teachers adorned in their fiery red tops, and more vociferous than the students, Walcott house was arguably the best organised house.  That undoubtedly had a positive effect on the athletes who did the business on the track.

At the start of the meet Walcott was trailing Daniel – the house that had led at the end of the road race and fun sports – by nine points.  However Mr Ishmael, Mr Noel, Mrs Henry, Ms Monrose and Co. were adamant that the deficit would be overhauled on the tracks.  They evidently knew what they were saying.  By lunchtime, Walcott had surged ahead and the wilting Daniel display had seen them fall into second place and only twenty odd points ahead of defending champions Charles.  That was an astounding feat by Charles who were trailing the leaders at the time by over 100 points at the start of the day in fourth place.

When the final relay race was over and before the official points tally was publicised, most present felt that Walcott had clinched it.  They were correct.  However such was Charles’s charge in the end that even some in the Walcott camp were visibly nervous during the anxious wait before the official announcenment.

When the final results were announced on the public address system confirming what most expected, the Reds’ jumped and screamed with jubilation and unrestrained frenzy.  There was a victory lap which was akin to a carnival band parade with their official House soca blaring in the background.

Massive congrats to Walcott once again for a well deserved CMMSS inter-house track and field championship victory. You guys were certainly ready!