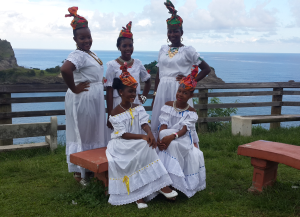 Hi folks! Its that time again.  The best secondary school La Wen Kweyol pagean on the planet organsised by CMMSS, shall be coming your way on Friday, 24th October, 2014 from 10:00 am on the school grounds.  Come and see the talented young CMMSS ladies strut their creole stuff on the grand stage. There will be lots of side attractions including popular local soca artistes.   Its going to be epic so you can’t afford to miss it.  The price of tickets remains the same – a totally affordable $10.00!  Bring your friends and family along.

Preparations for this event have been on a major scale.  Already the girls have appeared on the Straight Up show and have been interviewed and filmed by Calabash TV.  On Sunday 19th October, they shall be featured in a fashion show at Windjammer Landings Hotel.  The show is reaching stratospheric levels so you will be missing out massively if you are not a part of it!